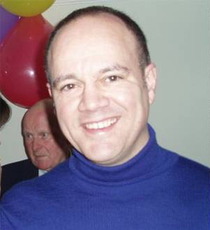 Alan David Neve's birth was registered in the fourth quarter of 1958 in the Surrey, South Western registration district. He was the elder son of Anthony W. Neve b.1932 and Moira Anne Neve née Emery (1933-2014).

Electoral registers of 1958 show his parents at Warren Farm Caravan Park, Warren Lane, Woking, Surrey, but the registers of 1959 and 1960 show them both at 30 Belmont Avenue, Guildford, Surrey and that his father was recorded as being in the armed forces and a Service Voter. The registers for 1961 and 1962 show both his parents as ordinary voters still at the same address.

Cycling to his job at the Performing Rights Society in Goodge Street Alan Neve was killed, aged 54, by a tipper truck at 9.25am on a Monday in High Holborn.

The driver, Barry Meyer, a 51-year-old man was arrested on suspicion of causing death by careless driving. Meyer was at the wheel of a tipper truck he wasn’t qualified to drive when he hit Mr Neve, dragging him under his vehicle.

Meyer, from Walthamstow, pleaded guilty at Blackfriars Crown Court in April 2015 to causing death by careless driving. He had numerous previous driving offences and was jailed for three-and-a-half years.

In February 2016 Meyer unsuccessfully appealed the jail sentence. Appeal Judge William Davis said “He didn’t pay any attention to other people on the road, in particular the cyclist. It’s clear Mr Neve was in full view of Meyer and drove straight over him.” The accident was “a bad case of careless driving that caused death” with aggravating features that were significant, the Appeal judge added.

This section lists the memorials where the subject on this page is commemorated:
Alan Neve

Killed by a tipper lorry on a Monday 8.30 am on his daily cycling commute fro...