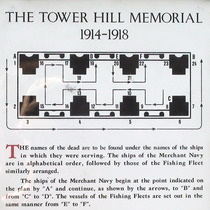 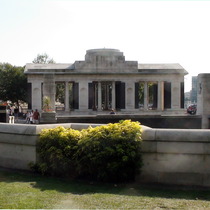 {On the south attic face, in metal letters standing proud of the stone:}
1914 - 1918
To the glory of God and to the honour of twelve thousand of the Merchant Navy and Fishing Fleets.

{On a bronze plaque on the base of this facade:}
To the glory of God and to the honour of twelve thousand of the Merchant Navy and Fishing Fleets who have no grave but the sea. 1914 - 0918.

View the 12,210 names commemorated on the monument

George V should have been on duty to unveil this but he was seriously ill so Queen Mary took over, the first time she had played such a role. (The date was 10th or 12th of December, depending on source.)

(Note: we've been contacted by someone investigating William John Dunne who is on this memorial and there is some doubt about his age at death, 32, as provided by the CWGC.)

The inside walls of this enclosed structure, 10 metres high, are lined with bronze plates on which are inscribed the names of over 12,000 dead. Our website provides access to this list but (for capacity reasons) our app doesn't.

Attached to the wall is a sort of User's Guide to this memorial.  It gives a ground plan (see our photo) and:
"The names of the dead are to be found under the names of the ships in which they were serving.  The ships of the Merchant Navy are in alphabetical order followed by those of the Fishing Fleet similarly arranged.  The ships of the Merchant Navy begin at the point indicated on the plan by “A” and continue, as shown by the arrows, to “B” and from “C” to “D”.  The vessels of the Fishing Fleets are set out in the same manner from “E” to “F”.   If visitors have difficulty in finding a name, they are advised to consult the Registers containing lists in alphabetical order of all those commemorated on this memorial at the office of the Corporation of Trinity House in this Square {contact details}.
Respect this sanctuary which bears the names of true men lost at sea.  Keep it clean and shipshape.”

2019: The Commonwealth War Graves Commission announced their plan to restore this memorial.

Note: 'Mercantile Marine' is the term used until after WW1 for what we now know as the Merchant Navy.

This section lists the subjects commemorated on the memorial on this page:
Mercantile Marine Memorial - WW1

This section lists the subjects who helped to create/erect the memorial on this page:
Mercantile Marine Memorial - WW1

The WW2 civilian list identifies 14 people who worked in civil defence and wh...