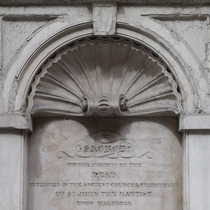 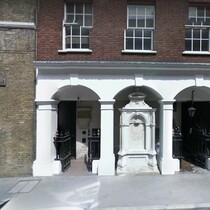 {On the main body of the monument:}
Sacred to the memory of the dead interred in the ancient church & churchyard of St John the Baptist upon Walbrook during four centuries.

The formation of the District Railway having necessitated the destruction of the greater part of the churchyard all the human remains contained therein were carefully collected and reinterred in a vault beneath this monument AD 1884.

An unusual and unsuccessful siting of a three-dimensional monument. One face is presented to the pavement, the rest of the monument is behind rather nice chunky railings and a nasty modern metal fence, along with 4 plaques and, when we visited, the usual detritus: traffic cones, old paint tins, litter, etc. Behind the monument is a ventilation shaft for the underground.

A number of London's monuments disguise similar shafts and we've listed the ones we know about at Dance's obelisk.

Whenever we visit this site the gate into the space beside the monument is always locked shut. The gate is made of railings with the addition of a metal mesh. Andrew Behan found our image on Google Street View, 2008 being the only date on which the Google camera captures the gate open.

This section lists the subjects commemorated on the memorial on this page:
St John the Baptist upon Walbrook - monument

First recorded in the 12th century. Destroyed in the Great Fire and never reb...

Formed to complete the 'inner circle' of the tube in London.  This was effect...

occupants of lost graves at St John the Baptist upon Walbrook

The dead interred in the ancient church &amp; churchyard of St John the Bapti...

This section lists the subjects who helped to create/erect the memorial on this page:
St John the Baptist upon Walbrook - monument

Churchwarden of St John the Baptist upon Walbrook in 1884. Andrew Behan has ...

Churchwarden of St John the Baptist upon Walbrook in 1884.  Given the shared ...

Rector of St John the Baptist upon Walbrook in 1884.  Born and died London.

This section lists the other memorials at the same location as the memorial on this page:
St John the Baptist upon Walbrook - monument