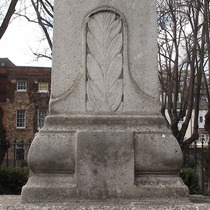 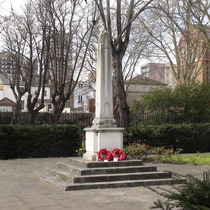 {On the east-facing side of the plinth:}
To the glorious memory of the brave men from St George-in-the-East who laid down their lives in the Great War, 1914 - 1918.
Give thanks to God O England for thy sons.

The "Give thanks" phrase does not appear to be a quotation, as we first thought, or if it is, it's eluded us.

The St George's website also informs that the list of names was drawn from the wider district and included names from other denominations, indeed, a representative of what we would now call the Jewish community made an address at the unveiling ceremony.  The memorial does not carry any overtly Christian imagery, even though the sword was designed as a "cross-hilted crusader's sword" - reminding us of George W. Bush's "crusade on terror" gaffe.

This section lists the subjects commemorated on the memorial on this page:
St George in the East war memorial

This section lists the subjects who helped to create/erect the memorial on this page:
St George in the East war memorial