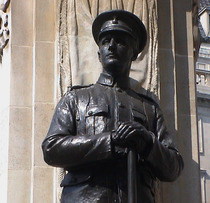 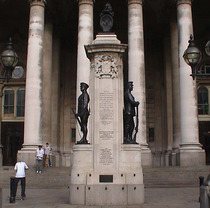 {On the west face, inscribed in the stone:}
To the immortal honour of the officers, non-commissioned officers and men of London who served their King and Empire in the Great War, 1914 - 1919, this memorial is dedicated in proud & grateful recognition by the City and County of London.
Their name liveth for evermore.
Unveiled on Nov 12th 1920 by H.R.H. The Duke of York on behalf of Field Marshal, H.R.H. The Duke of Connaught, K.G., K.T., K.P.

And albeit many units named hereon have changed in designation and role we honour and remember the men and women who served in all the units of the City and County of London in the war of 1939 - 1945.

{On a brass plaque, low down:}
Raised by public subscription at the Mansion House in the peace year 1919 during the mayoralty of Col. The Rt.Hon., Sir Horace Brooks Marshall, K.C.V.O., LL.D.

{On the east face there is a list of fighting units - see Subjects Commemorated below:}

Designed by Aston Webb with figures by Alfred Drury. The Duke of York who unveiled this later became George VI. Also present were the Lord Mayor of London and the Bishop of London. Identifying the Bishop is easy: Arthur Winnington-Ingram (1901-39) but the Mayor is more of a challenge. The unveiling took place on Friday 12 November 1920 when the City of London was on the cusp between two Lord Mayors:  At the “second week of November” Sir Edward Cooper would be replaced by James Roll, so we guess Cooper was still in place, just.

View from the Mirror have posted about this and have some great photos. There we learn that the Duke of Connaught (the unveiler of choice at the time) had to cancel his appearance due to bronchitis.

Our photos are never of the best quality but we feel we should apologise for one on this page . . . we have rather unfortunately removed the head and arms of the skate-boarder at the bottom left.

To make room for this monument a Temperance fountain had to be moved, to the north end of Blackfriars Bridge.

This section lists the subjects commemorated on the memorial on this page:
London Troops War Memorial

This section lists the subjects who helped to create/erect the memorial on this page:
London Troops War Memorial