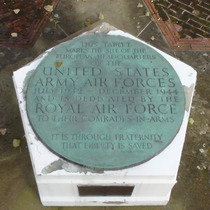 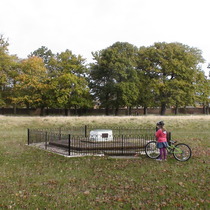 {On the plaque on top of the 5-sided plinth:}
This tablet marks the site of the European Headquarters of the United States Army Air Forces July 1942 – December 1944 and is dedicated by the Royal Air Force to their comrades-in-arms.

It is through fraternity that liberty is saved - Victor Hugo.

The quotation from Hugo is very well-chosen. He was exiled from France for 15 years and returned the day after the fall of Napoleon III's empire. When he arrived at Paris Gare du Nord, he made a brief speech to the crowd gathered to give him a hero's welcome, from which the quotation comes.

The hard-standing is attractively laid out with slabs, bricks and tiles making a 5-sided star pattern. The girl on the bike, Beth, kindly agreed to appear in some of our photos to provide scale and colour.

This section lists the subjects commemorated on the memorial on this page:
Camp Griffiss - USAAF

This section lists the subjects who helped to create/erect the memorial on this page:
Camp Griffiss - USAAF

Novelist, poet and dramatist, best known in the UK for Les Misérables, 1862, ...

This section lists the other memorials at the same location as the memorial on this page:
Camp Griffiss - USAAF

The first quote comes from the ancient Greek writer Hermes Trismegistus; the ...