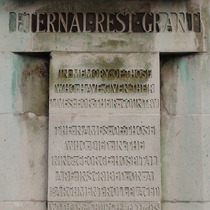 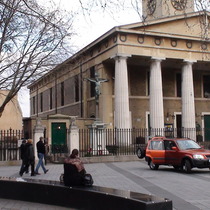 {On the west, the front of the plinth:}
{On a bronze plaque:}
Erected by the nursing staff in honour of the patients who died in the King George Hospital, H. M. Stationery Office Stamford Street, used as a military hospital during the war.

{All other inscriptions are carved into the stone.}

{Either side of the plaque:}
A. M.  D. G.
{Stands for 'Ad Maiorem Dei Gloriam', Latin motto of the Society of Jesus, meaning 'For the greater glory of God'.}

{The other three sides each contain 17 names.  Those on the south and north form an alphabetic list.  Those on the east (the back) are approximately in alphabetic sequence and we guess they were the late additions.  Some on this side are very badly weather-damaged.  We think we’ve managed to read them correctly but we have noted which these names are, just in case.

{A biblical text, John 15:13, followed by a prayer, is on a frieze wrapping around all four sides, starting below the plaque and above the names.  It is long enough to need 7 sections so it makes another part-circuit immediately above the names:}
Greater love hath no man than this, that a man lay down his life for his friends.  Eternal rest grant to them O Lord and may perpetual light shine upon them.

Unusually this memorial commemorates two quite separate groups of WW1 dead: patients of the local temporary war hospital, and the parishioners of the church. It's touching that, at least in part, the memorial was erected by the nursing staff of the hospital.

We love this style of lettering. Rather than cut out the letters the carver has removed the background, leaving the letters level with the surround.

This church was built in 1824 to celebrate victory in the Napoleonic wars. Badly bombed in 1940.  Restored in time for the 1951 Festival of Britain.  IanVisits, true to his name, has visited the 'secret crypt' of this church.

This section lists the subjects commemorated on the memorial on this page:
WW1 Memorial at St John's Waterloo

On east side of St John's Waterloo monument.

This section lists the subjects who helped to create/erect the memorial on this page:
WW1 Memorial at St John's Waterloo

Erected the year after Davidson's death, about 18 months after his resignatio...