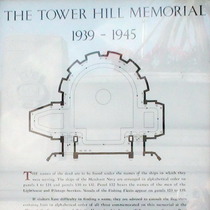 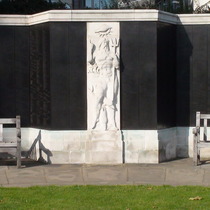 {On the low wall overlooking the sunken garden:}
1939 - 1945
The twentyfour thousand of the Merchant Navy and fishing fleets whose names are honoured on the walls of this garden gave their lives for their country and have no grave but the sea.

View the 23,831 names commemorated on the monument

Designed as an extension to the WW1 Mercantile Marine memorial to the south.  A semi-circular sunken garden contains the names of almost 24,000 British seamen and 50 Australian seamen, all listed on the walls of the sunken garden.  Our website provides access to this list but (for capacity reasons) our app doesn't.  In the centre of the garden is a pool of bronze, engraved with a compass pointing north.  The memorial incorporates two statues, one an officer and one a seaman of the Merchant Service, and seven allegorical figures in relief, one shown in our photograph, possibly representative of the seven seas.  The garden was intended to provide a quiet space for mourners and, as pointed out by Ward-Jackson in his magnificent 'Public Sculpture of the City of London', is reminiscent of the "...east end of an imaginary ruined church, complete with radiating chapels, an image with powerful resonances in the bombed City...".

Attached to the wall of the steps is a sort of User's Guide to this memorial.  It gives a ground plan (see photo) and: "The names of the dead are to be found under the names of the ships in which they were serving.  The ships of the Merchant Navy are arranged in alphabetical order on panels 1 to 121 and panels 130 to 132.  Panel 122 bears the names of the men of the Lighthouse and Pilotage Services.  Vessels of the Fishing Fleets appear on panels 123 to 129.  If visitors have difficulty in finding a name, they are advised to consult the Registers containing lists in alphabetical order of all those commemorated on this memorial at the office of the Corporation of Trinity House in this Square {contact details}.     Respect this sanctuary which bears the names of true men lost at sea.  Keep it clean and shipshape."

This section lists the subjects commemorated on the memorial on this page:
Mercantile Marine Memorial - WW2

This section lists the subjects who helped to create/erect the memorial on this page:
Mercantile Marine Memorial - WW2

There are so many issues with this memorial, it's difficult to know where to ...