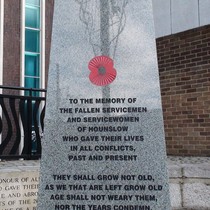 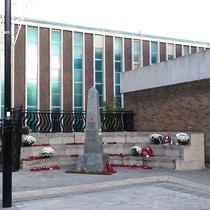 {On the front of the obelisk:}
To the memory of the fallen servicemen and servicewomen of Hounslow who gave their lives in all conflicts, past and present.

They shall grow not old, as we that are left grow old.
Age shall not weary them, nor the years condemn,
at the going down of the sun and in the morning
we will remember them.

When you go home tell them of us and say,
for your tomorrow we gave our today.

{On the stone at the back of the steps behind:}
In honour of all those who gave their lives at home and abroad in the conflicts of the 20th century for the sake of a better world.

Roll of Honour has a photo of the parish WW1 memorial that used to be inside the church: "Unfortunately the memorial was destroyed when the church burnt down in World War 2, caused by vandals not the German bombers!! It is not known whether this memorial was ever replaced. There are 114 names listed. The memorial was probably unveiled 11th November 1920." And the names are listed with some information about each one.

The stone at the back is clearly from an earlier memorial, post-WW2, but otherwise difficult to date. Its lack of specifics suggests it was just part of something more elaborate.

From War Memorials Online: "The original WW1 memorial for Hounslow was the children's ward at Hounslow Hospital (WMO85410). That was closed in 1977 and later demolished. This new memorial obelisk was dedicated in 2014. It is a civic memorial, despite being located outside the church. The memorial steps predate the obelisk, but there is little information available on them."

A nearby information board gives: "Hounslow grew up at an important junction of two great roads linking London and the West Country, and boasted several well-known coaching-inns. Holy Trinity Church was founded in 1211 by austere Trinitarian friars whose mission was to ransom Christians held captive in far-off lands. The friars raised money by sheltering travellers, administering Hounslow’s fairs and markets and by managing land donated by the pious. They also helped the town’s poor and sick.
The friary was dissolved by King Henry VIII, but the church has continued to serve the people of the town. The Prior’s house and estate were later known as Hounslow Manor. A new church replaced the friar’s chapel in 1828, but it was maliciously burned down in 1943 by two schoolboys. The present building was completed in 1963."

This section lists the subjects commemorated on the memorial on this page:
Hounslow war memorial

Service men and women of Hounslow who died in WW1, WW2 and all other wars

"Fallen servicemen and servicewomen of Hounslow who gave their lives in all c...

This section lists the subjects who helped to create/erect the memorial on this page:
Hounslow war memorial

{On the left side of the rusty information panel:}The war memorial at King’s ...

Caroline's Miscellany has an excellent post on Mydiddee.  We hope she won't m...