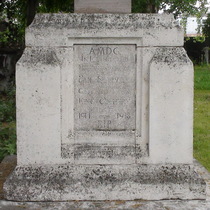 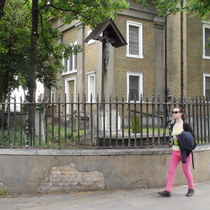 AMDG
In loving and honoured memory of the men of Shadwell who gave their lives for King and country in the war 1914 - 1918.
RIP

The lettering was done with the technique which involved lead letters attached through pin holes in the stone. As often happens the lead has been partially lost but the holes mean it is still, just, legible. We have reported this to the War Memorial Trust as requiring some repair.

This section lists the subjects commemorated on the memorial on this page:
St Paul’s Shadwell - war memorial

men of Shadwell who died in WW1

{On the central pillar:}The heroic dead {followed by 53 names listed over 3 ...

The letters/numbers at the end of many of the entries refer to the location o...