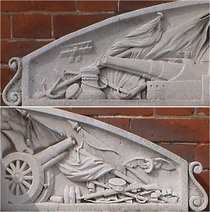 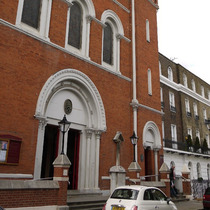 {At the top of the monument, below the cross, a laurel wreath around:}
The sacrifice was for us
{Flanking this are some nice reliefs showing military hardware. We’ve combined both flanks into one picture.}

{Above the names:}
Of your charity pray for the repose of the souls of
{A list of 42 names in three sections, in no particular order that we could identify, except that the son of the donor tops the middle list. Note that, since one of the names is duplicated, there are actually only 41 discrete names. See "Subjects Commemorated" for the list.}

May they rest in peace.

{Below the names, on a separate stone:}
This figure of Jesus crucified was erected By Richard Moore in memory of his son and other members of this congregation who fell in the Great War, 1914 - 1919.

Note that Pte. Charles R. King, 7th Centre of London Regiment, appears twice in the list. Such are the perils of not sorting your list!

2017: Mike of the Henley on Thames WW1 Remembrance Association refers us to the Army and Navy Gazette 17th November 1917: "...The cost of the memorial has been borne and the work executed by Mr Robert (actually Richard) Moore, sculptor (stone mason and supplier) ..." We believe the brackets are Mike's. We had previously thought that Moore Snr. had just funded the memorial but this says that he actually carved it himself.

This section lists the subjects commemorated on the memorial on this page:
St John's WW1 Memorial

Served in the 2nd Cav.M.Gun Co.

Served in the 2nd Royal Muns.Fusls.

Served in the King’s Royal Rifles

This section lists the subjects who helped to create/erect the memorial on this page:
St John's WW1 Memorial

This section lists the other memorials at the same location as the memorial on this page:
St John's WW1 Memorial

Blessed on the first of July 1993 by His Eminence Cardinal Basil Hume, OSB, ...

An unusual and unsuccessful siting of a three-dimensional monument. One face...

St Mary Magdalen, Bermondsey.  This churchyard was conveyed to the Vestry of ...