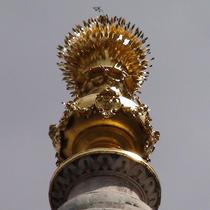 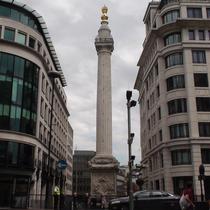 Monument: The Monument - east and south

{East face - Latin inscription with a bronze plaque below:}
Translation of the Latin inscription above:
(This pillar was) begun, Sir Richard Ford, knt., being Lord Mayor of London, in the year 1671; carried higher in the Mayoralties of Sir George Waterman, knt., Sir Robert Hanson, knt., Sir William Hooker, knt., Sir Robert Viner, knt., and Sir Joseph Sheldon, knt.; and finished in the Mayoralty of Sir Thomas Davies, in the year of the Lord 1677.

{South face - Latin inscription with a bronze plaque below:}
Translation of the Latin inscription above
Charles the Second, son of Charles the Martyr, King of Great Britain, France and Ireland, defender of the faith, a most gracious prince, commiserating the deplorable state of things, whilst the ruins were yet smoking provided for the comfort of his citizens, and the ornament of his city; remitted their taxes, and referred the petitions of the magistrates and inhabitants of London to the Parliament; who immediately passed an Act, that public works should be restored to a greater beauty, with public money, to be raised by an imposition on coals; that churches, and the cathedral of St. Paul's, should be rebuilt from their foundations, with all magnificence; that the bridges, gates, and prisons should be new made, the sewers cleansed, the streets made straight and regular, such as were steep levelled and those too narrow made wider, markets and shambles removed to separate places. They also enacted, that every house should be built with party-walls, and all raised of an equal height in front, and that all house walls should be strengthened with stone or brick; and that no man should delay building beyond the space of seven years. Furthermore, he procured an Act to settle beforehand the suits which should arise respecting boundaries, he also established an annual service of intercession, and caused this column to be erected as a perpetual memorial to posterity. Haste is seen everywhere, London rises again, whether with greater speed or greater magnificence is doubtful, three short years complete that which was considered the work of an age.

This section lists the subjects commemorated on the memorial on this page:
The Monument - east and south

This section lists the subjects who helped to create/erect the memorial on this page:
The Monument - east and south

This section lists the other memorials at the same location as the memorial on this page:
The Monument - east and south