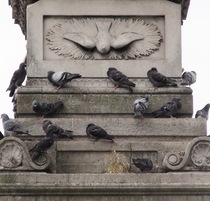 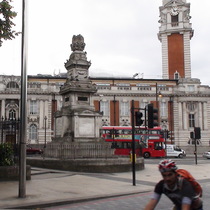 {On the north face:}
Sacred to the memory of Richard Budd Esqr., born in this parish, November the 26th 1748, and late of Russell Square, London. Died July the 8th 1824.
Gracious is the Lord and righteous. Yea our God is merciful.
This mausoleum was erected as a memorial of affection to a respected parent by his youngest son, Henry Budd Esqr.

{On the west face:}
Sacred to the memory of Mrs Charlotte Budd, wife of Henry Budd Esqre. of Russell Square, departed this life January 30th 1848. Truly lamented by her family and friends.
"Blessed are the dead which die in the Lord".

{On the south face:}
Sacred to the memory of Richard Budd, Esqre., eldest son of Henry and Charlotte Budd, died January 26th 1830. Truly respected and sincerely lamented.
Also Emmeline Budd, youngest sister of the above who departed this live April 18th 1851.
Also to the memory of Charlotte, eldest daughter of Henry and Charlotte Budd, who departed this life 28th September 1854.
In her a father lost a dutiful daughter, the pattern of a faithful Christian.

{On the east face:}
Sacred to the memory of Henry Budd Esqre. of Russell Square, departed this life January 10th, 1862.

Built the year after St Matthew's church, immediately to the south, was consecrated. The land between the church and the mausoleum was a graveyard but was converted to public space by 1956. We do not normally cover grave monuments but this one is so significant in the street-scape that we could not exclude it.

Richard Budd had been born in Brixton which probably explains why his son decided to place the family mausoleum here. This Budd family had lived at 10 Chatham Place, Blackfriars but later lived at 35 Russell Square.

Twickenham Park has provided much of our information on the Budds. Note that this monument is NOT for Dr Richard Budd and his son, the Rev.Henry Budd, Chaplain to Bridewell Hospital. They are not, as far as we know, related to our Budds.

This section lists the subjects commemorated on the memorial on this page:
Budd family mausoleum

Charlotte Budd was, according to baptismal registers, born on 28 September 18...

Emmerline Budd was born on 11 August 1816 the youngest of the six children of...

Richard Budd was born on 3 July 1806, the eldest of the six children of Henry...

This section lists the subjects who helped to create/erect the memorial on this page:
Budd family mausoleum

Property speculator and investor, and builder of the Budd mausoleum. Youngest...

Mason-sculptor of Camberwell. Active in 1825.