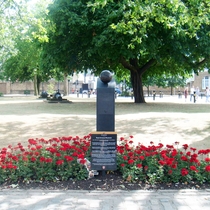 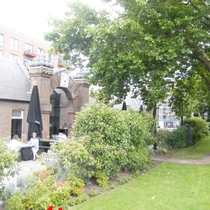 {Inscription on the plinth:}
Royal Arsenal Riverside
Royal Borough of Greenwich London
Royal Arsenal, Woolwich
The Dial Arch pub behind you is the site of the birthplace of Arsenal Football Club
In the late 19th century, a field gun workshop called Dial Square was located on the site, within the Royal Arsenal. The sundial that gave the building its name is still visible to this date.
In October 1886, a group of workmates from Dial Square formed a football team to break the monotony of day to day life in a munitions factory. They played their first game on 11th December 1886, on the Isle of Dogs, beating Eastern Wanderers 6 – 0.
After this game they changed their name to Royal Arsenal and grew to become one of the best clubs in the south of England. They were the first southern team to turn professional in 1891 and two years later joined the football league and changed their name to Woolwich Arsenal.
In 1913, the club moved north of the Thames to Highbury and changed their name to Arsenal. They were elected to English football's top division in 1919 where they have remained ever since.
Arsenal has since become one of the most successful teams in England, renowned throughout the world, and moved to its current Emirates Stadium in 2006. Yet the club never forgets its origins here at Dial Square and the ambition to bring people together through a common love of football.

{Inscription on the plaque in front of the plinth:}
Royal Arsenal Woolwich
Just a short kick of a football from this plaque is the birthplace of Arsenal Football Club.
The Royal Arsenal site once comprising over 1200 acres included an area known as the Great Pile of which the Dial Arch building formed a part. The sundial that gave the building its name is still visible to this day.
Adjacent to the Dial Arch building a smithy, carpenter's shop and machinery for producing brass cannon along with ordnance workshops.
Arsenal Football Club began life on this site in October 1886 when a group of workers decided to form a football team under the name Dial Square.
Dial Square's first match was a 6 – 0 victory over Eastern Wanderers was on the 11th December 1886 played at Plumstead Common. Soon after the name Royal Arsenal was adopted and the club continued playing in friendlies and local club competitions.
In 1891, the club turned professional and changed its name to Woolwich Arsenal, finally joining the Football League in 1896. In 1916 the club north of the Thames to Arsenal Stadium, Highbury and became known as Arsenal.
Following the first world war, Arsenal was voted into England's top professional league, a position it has held ever since.

Erected in about 2005, the memorial (now almost covered by foliage) can be seen on the right centre of our photograph. Because of the rampant vegetation, the inscription is virtually unreadable. A plaque has been placed in front of it, which is also fast becoming obliterated. Our close-up photo shows it before the foliage arrived.

The sundial from which the building gets its name can be seen above the arch to the left of the photo. Our photo of the monument (taken before the area was developed) is from the Greenwich Phantom's website.

This section lists the subjects commemorated on the memorial on this page:
Arsenal Football Club founded

This arch overlooked Dial Square, named for the sundial in the centre. It is ...

This section lists the subjects who helped to create/erect the memorial on this page:
Arsenal Football Club founded

A residential, retail and leisure development of the former Royal Arsenal sit...