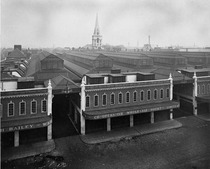 Opened by Frank Bearman on the site of a former vicarage. By 1906 he had purc...