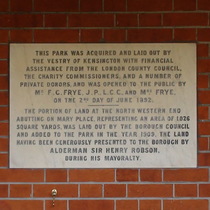 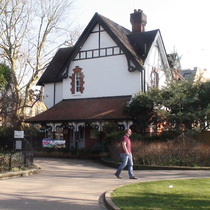 This park was acquired and laid out by the Vestry of Kensington with financial assistance from the London County Council, the Charity Commissioners, and a number of private donors, and was opened to the public by Mr. F. C. Frye, JP, LCC and Mrs Frye, on the 2nd day of June 1892.

The portion of land at the north western end abutting on Mary Place, representing an area of 1,026 square yards, was laid out by the borough council and added to the park in the year 1909, the land having been generously presented to the borough by Alderman Sir Henry Robson, during his mayoralty.

From RBKC: "Avondale Park, at the top of Pottery Lane, was created in 1892 when the area that had been a huge fetid pool known as "the ocean" was finally built on. This former area of slurry was part of the notorious Piggeries as well as the location of tile kilns and brickfields. The site was purchased from the Adams family in 1889, and after the excavations, seven feet in depth, had been filled in, the park was formally opened on 2 June 1892. It was called Avondale Park in memory of the recently deceased Duke of Clarence and Avondale."And then in 1909 Mayor Robson gave the section north of the tennis courts.

This section lists the subjects commemorated on the memorial on this page:
Avondale Park

The Charity Commission for England and Wales is the non-ministerial governmen...

{Beneath an image of a Victoria Cross medal:}Captain Ferdinand West, Royal Ai...

The Glaziers HallThe land in this area formed part of the site of the cloiste...