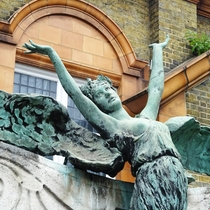 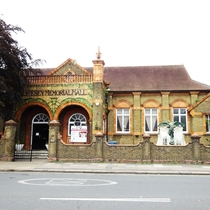 {Panel at the rear of the monument:}
Names of the co-partners and employees of the South Suburban Gas Company who took part in the Great War of 1914  1919.
{Followed by 460 names. See Subjects commemorated.}

{First tablet at the front of the memorial:}
On the tablets above are recorded names of co-partners and employees of the South Suburban Gas Company who made the untimate {sic} sacrifice in the World Wars 1914 - 1919 and 1939 - 1945.
This memorial to them is erected by their grateful employers and co-partners.
And these - oh, not for naught our burden bore.

{Second tablet at the front of the monument:}
In the Great War of 1914 - 1919
For the freedom of the world. 458 of the co-partners and employees of the South Suburban Gas Company took part. Their names appear heron: {sic} On the adjoining tablet being recorded the names of those who laid down their lives.
This memorial to them is erected.
1914 - 1919

Members of H.M forces
{Followed by 57 names which also appear on the rear panel:}

{Third tablet at the front of the monument:}
"If I should die, think only this of me:
That there's some corner of a foreign field that is forever England.
There shall be in that rich earth a richer dust concealed"
Rupert Brooke
1939 - 1945

The monument, designed by Sydney March, is grade II Listed. Prior to 2012 Google street view shows the original bronze plaques on this monument. They were stolen in October 2011 and replaced by these non-metal and less than sympathetic tablets.  Worse, they contain spelling and punctuation errors. One of the tablets refers to a total of 458 names, but after double-checking we still make it 460. The text on some of the tablets often incorrectly refers to the position or content of the tablets, which suggests that they are not close replicas of the originals.

Note that the panel at the back of the monument lists the names of employees of the South Suburban Gas Company, who 'took part' (presumably fought) in WW1 but who were not all actual fatalities.

"And these - Oh. Not for naught our burden bore", would appear to be a quotation, but we cannot trace it.

In the lists of name, 'Jnr.' and Snr.' are presumably used in the usual way to distinguish sons and fathers with the same first name.  'No. 1' and 'No. 2' are perhaps used to distinguish men employed by the company who shared a name but were not related.

The Livesey Memorial Hall is named for Sir George Livesey who was Chair (1890 to at least 1899) of the South Suburban Gas Company.

In 2021 South London News reported that the venue "... hosts various community, sports, and social events. Kier Property, which owns the building and land, confirmed it was “possibly” looking to sell, but said it “doesn’t expect” the use of the hall to change." But the locals are worried.

This section lists the subjects commemorated on the memorial on this page:
South Suburban Gas Company war memorial

Founded as the North Surrey Gas Company, it became the Crystal Palace Distric...

This section lists the subjects who helped to create/erect the memorial on this page:
South Suburban Gas Company war memorial

{On the large plaque with an image of protesters on a map of Africa:}Sharpevi...