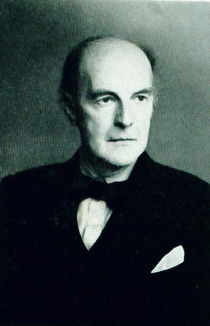 Architect. Born in Yorkshire as Edward Brantwood Muff into a family which, in 1903, moved to live in Philip Webb's Red House where Maufe lived for 7 years and later acknowledged the influence. 1909 changed his surname by deed poll from Muff to Maufe. Specialised in churches and memorials. London works include: Heal's in Tottenham Court Road (the southern extension), Morley College (1937 extension) and St Columba's Church, Pont Street.

His wife Gladys (who chose to be called Prudence) was a designer and interior decorator and became a director of Heals. Their marriage seems to have been an open one since Prudence was in a affair with Sir Ambrose Heal, also married. The Maufes designed a house (in Beaconsfield) for the Heals and they even holidayed together. Died in Uckfield Hospital on his 92nd birthday.

Information from a review of 'Edward Maufe: Architect and cathedral builder' by Juliet Dunmur, Edward's granddaughter.

This section lists the memorials where the subject on this page is commemorated:
Edward Maufe

This section lists the memorials created by the subject on this page:
Edward Maufe