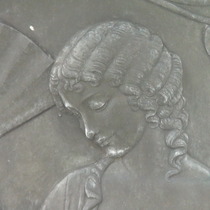 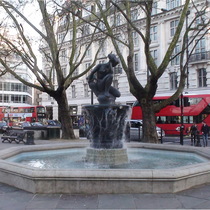 {Running around the urn near the top:}
Sweet Thames run softly till I end my song {quote fromProthalamion by Spenser

{Running around the urn near the bottom:}
Gilbert Ledward RA 1952
Presented by the Royal Academy of Arts through the Leighton Fund

{Under the figures:}
Charles II and Nell Gwynn

She's manipulating a fan but meanwhile, unnoticed by Nell, her dress has slipped off her right shoulder causing a costume malfunction.

There seems to be some connection between Nell and this area so we asked the very knowledgeable Dave Walker, the Local Studies Librarian at Kensington Central Library, who confirmed that there are many traditions about Nell's Chelsea connections, in particular the establishment of the Royal Hospital, but that many of them are frequently denied by historians. Dave tells us that the Chelsea pageant of 1908 included a lady dressed as Nell. At Chelsea we learn that "Charles II and Nell Gwynne were chosen by Ledward to reflect the journey along ‘the King's Private Road’ that Charles II would have taken to Nell’s residence at Sands End at the other end of the King’s Road."

Bonus fact: The statue atop the fountain represents Venus and, according to Greta Scacchi interviewed by the Guardian in 2008, the model was Pamela Carsinga, who later became Greta’s mother. In 1952 Pamela was training to become a member of the Bluebell Girls dancing troupe and paid her way by modelling for artists in Chelsea.

2019: The Library Time Machine hold a model for this fountain. Their post has a photo taken at the fountain's inauguration by Sir Gerald Kelly.

This section lists the subjects commemorated on the memorial on this page:
Nell Gwynne - Sloane Square

This section lists the subjects who helped to create/erect the memorial on this page:
Nell Gwynne - Sloane Square

This section lists the other memorials at the same location as the memorial on this page:
Nell Gwynne - Sloane Square

This drinking fountain, manufactured in cast-iron by 'Andrew Handyside &amp; ...