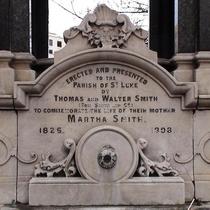 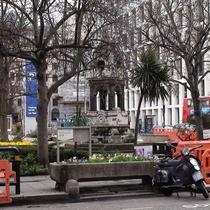 Erected and presented to the Parish of St Luke by Thomas and Walter Smith (Tom Smith and Co) to commemorate the life of their mother, Martha Smith, 1826 - 1898.

The sons erect the splendid water fountain and the daughters erect the utilitarian water trough. Does this tell us something about their personalities or about Victorian gender differences? What it doesn't tell us is any information about the family or the company 'Tom Smith and Co' and, given the surname, research is proving fruitless..... Until, in the lead up to Christmas 2012, the splendid Londonist posts an item about the origins of the Christmas cracker invented by no other than Tom Smith of Goswell Road, father of the family with a penchant for providing public water.

In 1847 Tom Smith, ornamental confectionery seller of Goswell Road, brought the French idea of a bon-bon wrapped in a twist of paper over to Britain. In1861, probably inspired by fire-works, he introduced a new product line, 'le cosaque', or the 'Bang of Expectation', or crackers as we now know them. This successful product, used to celebrate any event you care to name, enabled the business to move to larger premises on Finsbury Square, where they stayed until 1953. It was one of his sons who introduced the paper crown, in the 1880s.

The firm received their first royal warrant in 1909 and still make exclusive crackers for the royal family. Tom left his business to his three sons: Tom, Henry and Walter. In 1953 the firm merged with Caley Crackers and moved out to Norwich. More information at Tom Smith Crackers. Incidentally, we’ve heard it said that the reason crackers are a British thing and have not taken off in America, for example, is because we Brits feel the need to teach our children early on about disappointment.

2016: Via Facebook Chris Harry provided a link to the splendid ReelStreets with a still from the 1958 film, The Salvage Gang, showing this fountain at the south-west corner of the square. We'd hazard a guess that it got moved when the underground car-park was built, probably in the 1960s or 70s.

This section lists the subjects commemorated on the memorial on this page:
Smiths' water fountain monument

This section lists the subjects who helped to create/erect the memorial on this page:
Smiths' water fountain monument

This section lists the other memorials at the same location as the memorial on this page:
Smiths' water fountain monument

In remembrance Martha Smith 1898. Erected by her daughters P. L. and L. D.