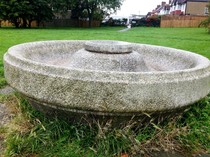 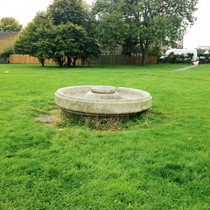 The listing entry says that this is a rare example of a circular drinking trough of granite construction but does not comment on its state of completeness. We suspect that this is is merely the basin which would have been mounted on a pedestal and would have had a central urn above holding a tap supplying the water. This type of fountain was relatively common, for example: Emily Orbell's fountain. Thus it was not a trough for animals but provided water to slake human thirst.

Prompted by the Finsbury Prater water trough our colleague Andrew Behan researched the man and went and found this other fountain.  He reports that the wording on the basin is now worn away through time and only '…FT OF…' can be deciphered.  But the Historic England listing entry gives all the information needed, in particular:

“The trough originated at the cattle market which was located to the south of Croydon town centre. The market opened in 1848 and was attended by the farmers of Kent, Surrey and Sussex, and by the butchers of South London. The market closed in 1935 and was demolished and redeveloped shortly after. The trough was moved to Norbury Park, created in 1935…..this is an unusual and handsome example of a circular trough.”

This section lists the subjects commemorated on the memorial on this page:
Prater fountain - SW16

(inscribed in the marble plaque and very difficult to read:}Joseph Salter, 18...

For the good of the public this fountain is erected near the site of an ancie...