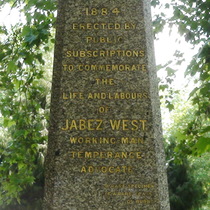 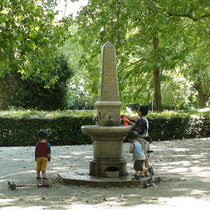 {On north face of the obelisk:}
1884 erected by public subscriptions to commemorate the life and labours of Jabez West, working-man, temperance advocate.
A rare specimen of a rare class – Dr Burns

This is a very unusual monument for the time, being in honour of a working man.

A nearby Information board gives:
This fountain was erected in memory of the temperance advocate Jabez West and formally unveiled on 3rd April 1885. Jabez West (6th June 1810 – 13th May 1884) was a blacksmith’s son from Princes Risborough, who came to Bermondsey in the 1830s. He worked in the leather trade but became best known in the area for devoting his time to political reform and the temperance movement. He also campaigned for Southwark Park. After his death, the Metropolitan Board of Works took the unusual step of agreeing to this memorial for a working-class man. The fountain is made of polished grey granite at an original cost of £120, which was paid for by public subscription.

In The Good Templars' Watchword of 6 April 1885 we found a report of the unveiling which we give here in full (having corrected some OCR errors): On Good Friday, in most auspicious weather, the Temperance community of London assembled in Southwark Park to do honour to the memory of the late Jabez West, the Bermondsey tanner, and witness the unveiling of the drinking fountain erected in this park by permission of the Metropolitan  Board of Works, in commemoration of the grand work accomplished for Temperance by this earnest zealot of the cause. It was computed that nearly 70,000 people thus spent their Good Friday afternoon and to the credit of all concerned, be it said, the conduct of the immense assemblage was most orderly and good humoured. Ninety-six Lodges of the Sons of Phoenix, Good Templars and other organisations took part, and we understand there were banners present also from Ireland and Scotland. The procession, numbers of which came from all over London, arrived at the park about 3 p.m. and shortly after a party consisting of Mr. Benjamin Whitworth, M.P., Mr. A. Cohen, Q.C., M.P., Professor Rogers, M.P., the Rev. Dr Dawson Burns, Rev. J. M. Camp, Rev. J. H. Carlile, Rev. G. W. McCree, Rev. G, M. Murphy, Mr. Alexander Hawkins, Mr. W. Shepherd, Mr. Andrew Dunn, Mr. John Hilton, and several ladies, accompanied by the juvenile members of the Phoenix Order and a fife-and-drum band, assembled in the vicinity of the fountain. Mr. Whitworth then performed the ceremony of unveiling it, and declared it open for public use. The fountain is of grey granite, standing 10ft. high, with four jets of water, and bears the following inscription: — "Erected, by public subscriptions, to commemorate the life and labours of Jabez West, working-man Temperance advocate — 'A rare specimen of a rare class,' Dr Burns." Addresses were then given by Mr Whitworth, Professor Rogers, and Dr Dawson Burns, and the proceedings closed by a vote of thanks to the chairman. In the evening a public tea and meeting were held.

Southwark Park Association contains another report of the unveiling.

This section lists the subjects commemorated on the memorial on this page:
Jabez West fountain

Campaigning working-man and temperance advocate. Son of a blacksmith from Pri...

This section lists the subjects who helped to create/erect the memorial on this page:
Jabez West fountain

There are a number of Reardon fountains of this design and most seem to have ...