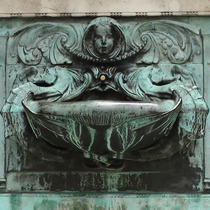 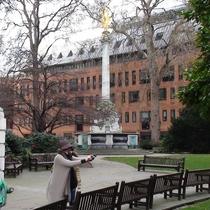 {Plaque on the north side of the balustrade:}
In memory of Anne Richards, buried in this churchyard, of her son Frederick Richards, for many years resident in Watling Street, and of her grandson Frederick Field Richards, priest, resident for many years in St Paul's Churchyard. This cross was erected by Henry Charles Richards, citizen, baker, and turner, one of His Majesty's Counsel, Treasurer of the Honourable Society of Gray's Inn, 1904 - 1905, and member of Parliament for East Finsbury, 1805 - 1905, who spent the happiest hours of a busy life as a frequent worshipper within the walls of this cathedral.
"God be merciful to me, a sinner". {Luke 18:13}
H.C.R. OB 1st June 1905.

{Plaque on the east side of the balustrade:}
On this plot of ground stood of old "Paul's Cross" whereat amid such scenes of good and evil as make up human affairs the conscience of church and nation through five centuries found public utterance. The first record of it is in 1191 AD. It was rebuilt by Bishop Kemp in 1449 and was finally removed by order of the Long Parliament in 1643. This cross was re-erected in its present form under the will of H. C. Richards to recall and to renew the ancient memories.

{The west side of the balustrade carries the lovely art nouveau drinking fountain, pictured; the south side provides access via an ornamental gate.}

Seems the Richards family slightly missed the spot with their elaborate art nouveau erection. The simple hexagon can just be seen in our picture, in the foreground paving, to the right of the lady photographing a squirrel.

Londonist drew our attention to a 3D animation of the medieval St Paul's church and Paul's Cross.

This section lists the subjects commemorated on the memorial on this page:
Paul's Cross and the Richards family

Sermons had been preached at Paul's Cross since at least the 12th century. I...

Convened by Charles I, this got its strange name because through an act of Pa...

Priest. Born Hackney, the eldest son of Frederick Richards and grandson of An...

Married to John Richards, mother to Frederick Richards (their only son?). Bur...

This section lists the subjects who helped to create/erect the memorial on this page:
Paul's Cross and the Richards family

Born in Melbourne, Australia. Came to London to study at the British Museum a...

This section lists the other memorials at the same location as the memorial on this page:
Paul's Cross and the Richards family

{Inscribed on the stone at the centre of this octagonal paving arrangement:} ...

Funded by private donations from MPs and unveiled by the Queen. 26 foot high,...

Is it likely that the beloved friend was a horse or dog rather than a person?

The Latin quotation is interesting. It is from the Bible, Proverbs 3;16, and...