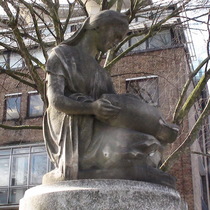 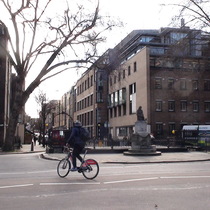 This figure represents the woman of Samaria (a Samaritan) at the well, from St John's gospel.

From the Grade 2 listing entry: "Drinking fountain situated on a traffic island. 1870. Designed by architect Henry Darbishire for the Misses Whiting to commemorate their mother. ... a sculptured figure of the Woman of Samaria, in loose robes and scarf, kneeling on left knee to fill a water jar. The drinking fountain forms a civic group with the cast-iron railings to the Ladies' & Gentlemen's public conveniences (qv), situated behind it."

These toilets are referenced in Sarah McCabe's dissertation: 'The Provision of Underground Public Conveniences in London with Reference to Gender Differentials, 1850s-1980s'. The toilets arrived in 1931 and were closed c.1988 due to costs. On the subject of toilets, for ladies in particular: it is said that the Ladies in Parkway, Camden Town, was probably the first Ladies in London, It was created, along with the Gents, in about 1900, at least partly due to the promptings of George Bernard Shaw, a St Pancras councillor at the time. It attracted opposition since the absence of toilets for ladies restricted their freedom and kept them where they belonged: at home.

This section lists the subjects commemorated on the memorial on this page:
Frances Whiting memorial fountain

Over a few years this fountain has led us on a merry dance, trying to identif...

This section lists the subjects who helped to create/erect the memorial on this page:
Frances Whiting memorial fountain

2022: Sebastian Bulmer told us about AngloBoerWar which has extensive photogr...

The new plaque (not shown) is rather brash but we like how the wording refers...