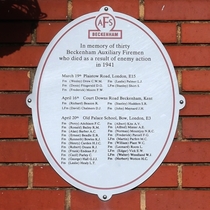 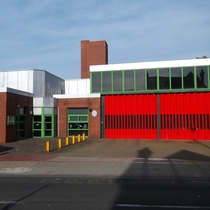 In memory of thirty Beckenham auxiliary firemen who died as a result of enemy action in 1941.
{Followed by 30 names. See Commemorated subjects}
AFS Beckenham

Those killed at Old Palace School are also commemorated (not by name) on a plaque at the site of the original school, although this gives the date as 19th April 1941. The website Firemen Remembered says the attack took place on the night of 19/20th April, and times the explosion at shortly after 1.30 a.m.

The firemen killed in the air-raid at Plaistow Road are also commemorated on a plaque near to the site of the attack.

Our colleague Andrew Behan reports that the date of the April incident/deaths shown on the plaque is incorrect. Whilst the 16 April 1941 is listed as the date in the Firefighters Memorial Trust records, all other records, such as Probate, UK WWII Civilian Deaths 1939-1945, FindaGrave and the George Medal recommendation give the incident date as 17 April 1941. The plaque has mispelt Healey's surname. Also Fireman Maynard did not die from his injuries until 9 November 1941 as recorded on his gravestone. See David J. Chalmers for more details of the event.

This section lists the subjects commemorated on the memorial on this page:
Beckenham Auxiliary firemen

This section lists the subjects who helped to create/erect the memorial on this page:
Beckenham Auxiliary firemen

This foundation stone was laid by the Right Honourable and Right Reverend Art...

He was here for his first 15 years.

{Top plaque:}This stone was laid by Mrs Onslow, for the glory of God and the ...

{Beneath an image of a Victoria Cross medal:}Lieutenant Frank de Pass, 34th P...