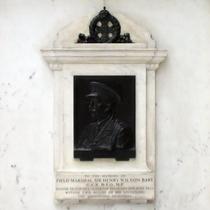 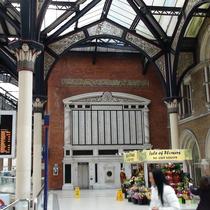 {Incised in the marble below the bronze portrait:}
To the memory of Field Marshal Sir Henry Wilson Bart. GCB, DSO, MP, whose death occurred on Thursday 22nd June 1922, within two hours of his unveiling the adjoining memorial.

The memorial he had just unveiled before his death is the main war memorial, not the one to Fryatt.

This section lists the subjects commemorated on the memorial on this page:
Sir Henry Wilson at Liverpool Street Station

This section lists the subjects who helped to create/erect the memorial on this page:
Sir Henry Wilson at Liverpool Street Station

Member of the RA. The picture is a self-portrait.

This section lists the other memorials at the same location as the memorial on this page:
Sir Henry Wilson at Liverpool Street Station