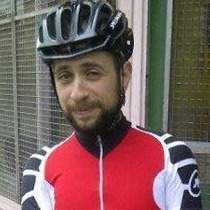 Akis Kollaros was killed by a tipper truck at about 4pm on a Monday. From Roadcc: "A 34-year-old originally from Greece, Akis Kollaros was a music producer and sound engineer, and a member of the London Dynamo cycling club. The driver of the lorry has helped police with their enquiries, but no arrests have been made." Our picture originated at GoFundMe.

This section lists the memorials where the subject on this page is commemorated:
Akis Kollaros