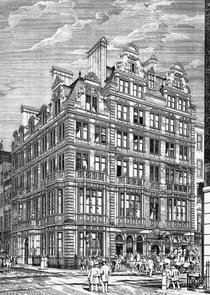 This building is still at 66-68 Piccadilly, on the north-east of the junction with Dover Street.  Architect: Weatherley and Jones.

From British History (written in 1878, just 10 years before Selby's journey): “A new house … rejoices in the sign of the "White Horse Cellar;" and at Hatchett's Hotel, which adjoins it, an attempt has been made, within the last few years, to revive the taste for coaching, and, with this aim in view, stage-coaches have been run daily during the summer to Sevenoaks, Tunbridge Wells, Windsor, Brighton, Dorking, &c. …The Brighton road was the last to give up the old-fashioned stage-coach, and the first selected by the amateurs who are the stage-coach owners of to-day. …. In the year 1866, and chiefly through the exertions of Mr. Lawrie, a little yellow coach, called the 'Old Times,' was subscribed for in shares of £10 each, and made its appearance on the 'Brighton' road, …. The success was so considerable, that in the April of the following year the Brighton was 'doubled,' and two new coaches built especially for the work…”

This section lists the memorials where the subject on this page is commemorated:
White Horse Cellars at Hatchett's Hotel

Founded in London by author Graham Greene, its founding president.  The Handb...

Opened by Swiss hotelier Cesar Ritz. The first hotel in the country where ev...