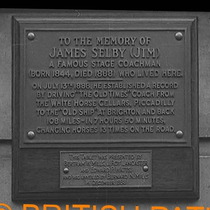 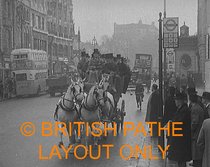 On July 13th 1888, he established a record by driving “The Old Times” coach from The White Horse Cellars, Piccadilly, to the “Old Ship” at Brighton and back, 108 miles in 7 hours 50 minutes, changing horses 13 times on the road.

Bertram Mills had died 8 months before the plaque was unveiled.  The Winnipeg Tribune of 7 January the following year contains a vivid description of the unveiling, in the 50th anniversary year.

Our street picture is from the British Pathe news film of the unveiling and shows the carriage of coaching enthusiasts arriving for the unveiling. Annoyingly the film does not show the building on which the plaque is erected, other than a few feet around the plaque. Assuming that the street has not been renumbered since the unveiling we believe the plaque was where we have placed the pin on our map.  The 1957 building now at the location is a post-war bomb site extension to the Victory Service Club in Seymour Street.

This area, to the west of Edgware Road, was first developed as the fashionable suburb of Tyburnia, 1800-30. So in 1888 we think 7 Edgware Road, Selby's home, was probably one in a terrace of Georgian housing. However, in the film of the 1938 unveiling what one does see of the building to which the plaque is attached does not look like a Georgian terraced house, more like a circa 1900 commerical building; one which only 2 or 3 years after this ceremony would itself be bombed out of existence.

We thank Jamie Davis for finding this link to the British Pathe news film of the unveiling, and for telling us about it.

In case anyone is interested: The Victory Service Club was formed in 1907 to relieve the poverty of demobilised soldiers following the Boer War.  Starting as the Veteran’s Club in Holborn it moved and changed its name a few times settling in Seymour Street in 1948 into Connaught House (1906, architect Durward Brown) which had been used by the United States Armed Forces during the war. The Edgware Road extension was built in 1954-7 on a bomb-damaged site.

This section lists the subjects commemorated on the memorial on this page:
James Selby

This building is still at 66-68 Piccadilly, on the north-east of the junction...

This section lists the subjects who helped to create/erect the memorial on this page:
James Selby

We have discovered two facts about a John Roy Lancaster: In 1911 he was work...

Son of a proprietor of a coaching firm in Paddington who built coaches, provi...

We can find no information on Mr Watts.

Google Streetview enables us to say that this plaque was erected between June...