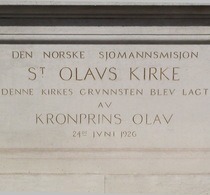 This section lists the subjects commemorated on the memorial on this page:
St Olav's Church - 1926 - foundation stone

This section lists the other memorials at the same location as the memorial on this page:
St Olav's Church - 1926 - foundation stone

The bronze of the plaque is so dulled that it does not photo well, all except...

This plaque commemorates the tercentenary of Shipley's birth and the site of ...