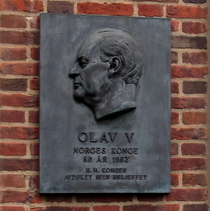 {Translates as:}
Olav V, King of Norway 80 years old. 1983 His Majesty the King unveiled this plaque.

This section lists the subjects commemorated on the memorial on this page:
King Olav V of Norway

This section lists the other memorials at the same location as the memorial on this page:
King Olav V of Norway

Site of St Martin Outwich, demolished 1874.The Corporation of the City of London

Hoyland was interviewed by Charles Booth regarding this mission on 2 February...

The plaque was unveiled by his widow Valerie.