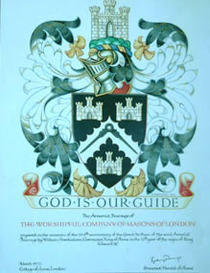 The masons did very well out of the post-fire rebuilding of London. From their website: "The focus of our Livery Company is to preserve and encourage the use of natural stone in the built environment. This includes supporting the training of craftsmen as well as the preservation and appreciation of iconic historic stone buildings....

Our Company was formed with the object of regulating the craft of stonemasonry so that standards could be properly maintained and rewarded. The earliest available records of regulation from the Court of Aldermen are dated 1356. In 1472 a Grant of Arms was received under Letters Patent but it was not until 1677 that the Company was formally incorporated by Royal Charter under the seal of King Charles II which gave it authority to control the work of masons in the Cities of London and Westminster and seven miles around. This was a necessary power in order to control the influx of provincial stonemasons assisting in the rebuilding of the capital following the Great Fire in 1666 and to enable the maintenance of strict standards, although governance was never quite as tight again.

Since then members of the Company have been involved in the creation and preservation of the majority of iconic stone buildings and structures across these Cities and nationwide. Joshua and Edward Marshall erected Temple Bar in 1673, the barrier from where trade was officially regulated into the City. Four years later Thomas Strong laid the foundation stone of the new St Paul’s Cathedral and his brother Edward laid the last stone of the building’s lantern in 1708. Both Marshalls and Strongs were Master Masons among a number of other prominent members of the Company who worked on the City’s most beautiful monuments under Sir Christopher Wren. Between 1670 and 1718 at least 8 individuals actively involved in the construction of St Paul’s became Masters of the Masons’ Company."

This section lists the memorials created by the subject on this page:
Worshipful Company of Masons

Waymarking says this "It was the home of the Fellowship Porters who, towards ...

From the Butchers' website: "Five of our seven Halls were burned down includi...