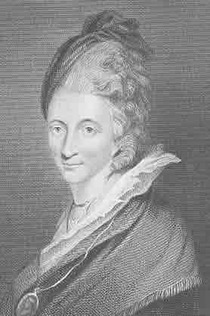 Writer and good friend to Samuel Johnson. Born near Bwlheli, Caernarvonshire, as Hester Salusbury. In 1763 was married for money to Henry Thrale, a wealthy London brewer. An unhappy marriage, with many pregnancies but few long-lived children, the Thrales nonetheless entertained playwrights, etc. and Samuel Johnson became a friend and frequent visitor, and then, for 16 years, a house guest, at both Streatham and Southwark.

Hester was actively involved in running the brewery. Henry died in 1781 and in 1784 Hester married Italian musician Gabriel Mario Piozzi - a love-match. They moved to Wales in 1795 but he died in 1809. She lived on in Bath and died at Clifton.

This section lists the memorials where the subject on this page is commemorated:
Mrs Hester Thrale (Piozzi)

Hester Thrale, born 1741. Hester was a colourful member of London society, no...

Central President of the Mothers' Union in 1925. We found reference to a publ...