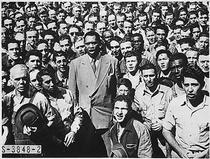 Singer, actor (also athlete and civil rights activist). Born Princeton, New Jersey to a former slave, who educated himself to become a theologian and who had great expectations of his son, expectations which were surely realised.

Robeson came to London a number of times including a visit for the 1930 production of Othello opposite Peggy Ashcroft. A letter in the Camden New Journal, 30 July 2015, said that Robeson visited the Unity Theatre and acted in the 1938 production of 'Plant in the Sun'. Died in Philadelphia, Pennsylvania, in relative obscurity.

This section lists the memorials where the subject on this page is commemorated:
Paul Robeson

Stage and film Actor. Born Margaret Taylor Rutherford in Balham. She was well...