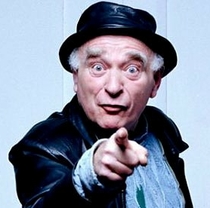 Writer, actor, director and comedian. Born in Ilford, Essex. Described as one of the strangest people in Britain. He trained at RADA (Royal Academy of Dramatic Art), but never fitted into any conventional slot in the theatre. His 1976 play Illuminatus!, (an eight-hour epic based on an American sci-fi trilogy), was the first production in the National Theatre's Cottesloe auditorium. He made numerous cameo appearances in films, plays and television comedies, including a version of Macbeth in pidgin English.

This section lists the memorials where the subject on this page is commemorated:
Ken Campbell

The Cunard Film Company Limited moved into a purpose-built studio, close to t...