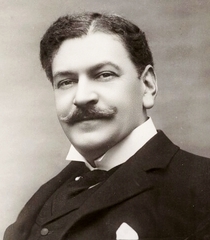 Actor and theatre manager. Born in Speen, Berkshire. Made his first stage appearance in 1889, although his performances were met with less than critical acclaim. W. S. Gilbert said of his rendition of Hamlet: 'At last we can settle whether Bacon or Shakespeare wrote the plays. Have the coffins opened and whichever has turned in his grave is the author!'. He managed several west end theatres, including the Royalty, the Criterion, the Garrick, His Majesty's and the Strand, and also appeared in several films. He later took an interest in politics, and was selected as the prospective Labour candidate for Gloucester, but died in Johannesburg before the election could take place.

This section lists the memorials where the subject on this page is commemorated:
Arthur Bourchier

Founded by brothers David William and Thomas J. Gobbett, it was the first pur...