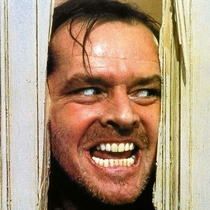 Actor. Born John Joseph Nicholson in Neptune City, New Jersey. He has played a wide variety of characters in films inluding 'Easy Rider', 'Five Easy Pieces', 'One Flew Over the Cuckoo's Nest' and 'The Shining' (see our photo). He has had twelve Academy Award nominations, making him the most nominated male actor in history, and he has won the Best Actor Award twice.

This section lists the memorials where the subject on this page is commemorated:
Jack Nicholson

Our 1960 picture comes from Warsaw1948 which has a wonderful collection of ol...