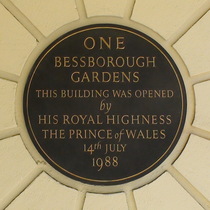 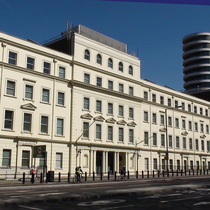 One Bessborough Gardens - This building was opened by His Royal Highness, the Prince of Wales, 14th July 1988.

Not the style but the high quality of this plaque reminds us of the one on Lorne House, unveiled by the Princess of Wales the following year.

This section lists the subjects who helped to create/erect the memorial on this page:
Bessborough Gardens - Prince of Wales

This section lists the other memorials at the same location as the memorial on this page:
Bessborough Gardens - Prince of Wales

This building was once known as the National Sporting Club, March 1891 - Octo...