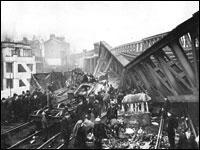 The colision actually happened at St John's station, one stop to the north-west) which is close to Lewisham. It was a very foggy night and an electric train was being held at a red signal. It was struck from behind by a steam train on the same track whose driver had failed to see two yellow caution signals. He was subsequently put on trial for manslaughter, but the jury couldn't reach a verdict. A second trial was convened, but cancelled because the driver's mental health had been severely impaired. 90 people were killed and 173 injured. In terms of loss of life, it ranks as the third worst rail crash in the UK.

Londonist points out that Lewisham has suffered three significant train disasters: 1857 (east of station), 1957 (St Johns) and 1967 (Hither Green). That recurring 7 is a bit spooky, isn't it?

This section lists the memorials where the subject on this page is commemorated:
Lewisham train disaster

In memory of those who lost their lives. Lewisham train disaster, 4th Decembe...

On the first day of the Blitz it seems that a 50kg bomb fell through a ventil...

Those killed during the Bengali Language Movement demonstrations in 1952. At ...