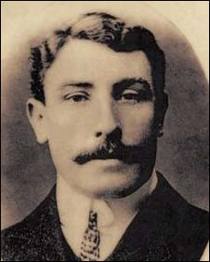 William Frederick Tyler was the third child of Alfred Tyler (1853-1900) and his first wife, Susan Tyler née Fenn (1852-1883). His birth was registered in the 3rd quarter of 1877 in the Hendon, Middlesex, registration district.

The 1891 census informs that he was now assisting his father as a florist and was living at Clarendon Villas, Finchley Road, Childs Hill, Hendon, with his father, stepmother, his three siblings and two half-siblings.

In 1903 he married Emily Burfield in Holborn and they lived at 32 Arnold Road, Tottenham.

He joined the Metropolitan Police Force and as Police Constable 403 of 'N' Division, he was killed, aged 31, on 23 January 1909 in the Tottenham Outrage.

The bravery of his actions and those of his colleagues led to the establishment of the King's Police Medal and he was, posthumously, the first recipient.

He is also commemorated by a plaque in All Saint's Church, Church Walk, Childs Hill, London, NW2 2TJ.

This section lists the memorials where the subject on this page is commemorated:
PC William Frederick Tyler

Station Officer -  One of two men (with Frederick Mitchell) who gave their li...