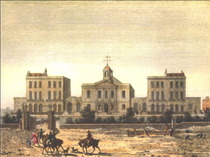 From Union Chapel: "Our story ... started in 1799 when dissenting congregants from St Mary’s, Upper Street began worshipping together in a private house in Highbury Grove." This was number 18. "Every year, we note our Foundation Day, 28 August, when worship began in the chapel that previously occupied this site, in 1806. The houses either side were built at the same time." The picture shows the site at this time. More information and pictures at the Friends page.

The current 1874-7 building is by James Cubitt (apparently unrelated to the various other architects and engineers with the same surname that were developing London at the same time, or so distantly related that it doesn't count) with additions in 1877-90.

This section lists the memorials where the subject on this page is commemorated:
Union Chapel, Islington

Lambe's Chapel and crypt / St James in the Wall

In 1543, after the dissolution of the monasteries, the hermitage Chapel of St...

In 1720 the old church was demolished, all but the clock tower, and rebuilt, ...

The picture source provides the following information: Built in 1874 as a cha...

Quaker leader and founder of Pennsylvania. Born in the Liberty of the Tower. ...