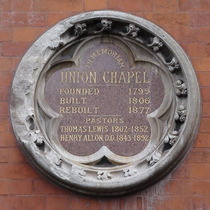 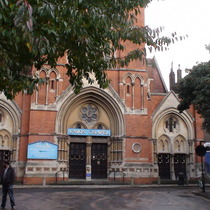 The two pastors are Lewis, the first, and, Allon, the one that oversaw the erection of this building. This plaque was probably added shortly after Allon's death in 1892.

This section lists the subjects commemorated on the memorial on this page:
Union Chapel

Born near Hull.  Joint pastor of the Islington Union Chapel from 1843/4 with ...

The first pastor of the Islington Union Chapel, appointed in 1802/4 (sources ...

This section lists the other memorials at the same location as the memorial on this page:
Union Chapel