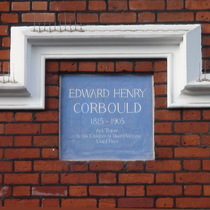 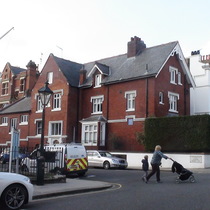 The plaque is a one-off in a delicate serif typeface. The off-set string course suggests that the plaque was designed into the building. But 1851 would be very early for a plaque; 16 years before the Royal Society of Arts began their plaque scheme (now run by English Heritage) and even for the royal tutor it would surely be too self-aggrandising to put a plaque on your own house. Perhaps there was another decorative element here which, some time after Corbould's death, was replaced with this plaque.

The plaque is actually in Eldon Road.  From British History On-line: ".. erected in 1851–3 for the painter Alfred Hitchen Corbould who specialized in horses and dogs. The builder was Daniel Edwards of Haverstock Street, Hampstead Road. Corbould took the lease in 1855, over a year after moving in. He remained until about the end of 1866, when the house was taken by his relative Edward Henry Corbould ..." who immediately added the studio wing, which must be the western section, to the left in the photo.

Victorian Artists gives us Alfred's dates: 1821 - 74, so he was only 30 when this substantial house was built. Edward was Alfred's eldest brother. The artistic Corboulds were a large family, easy to confuse with each other, and we do wonder whether British History Online has made a mistake and it was actually Edward who built the house. In 1851 he became tutor to the royal family so it would have been natural for him to do a bit of ostentatious splashing out.

This section lists the subjects commemorated on the memorial on this page:
Edward Corbould

Artist. Born into a family of artists either at 70 (St) John Street, now Whit...

We believe that the crown and the 'B' are indicative of the Bedford Estates a...