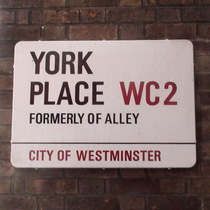 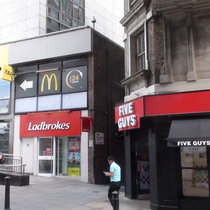 In 1672 the Duke of Buckingham sold his land north-east of where Charing Cross Station now stands, for development. It was common to name streets after the local landowner but this Duke, who had a way with words, wanted all 5 elements of his name commemorated, including the "of".

Londonist have a one minute video explaining how the new streets were named: Of Alley is now York Place; George Street is now York Buildings; Duke Street is now John Adam Street; but Villiers Street and Buckingham Street survive with their original names.

This section lists the subjects commemorated on the memorial on this page:
Duke of Buckingham, George Villiers "of"

Statesman and poet. Born at the family home Wallingford House (where the Old ...

This section lists the subjects who helped to create/erect the memorial on this page:
Duke of Buckingham, George Villiers "of"

This plaque must have originally been erected on the Church Street building, ...

In this Hall Sir Thomas More, Lord Chancellor of England, Speaker of the Hous...

The wall plaque has not only an ornate cartouche with the inscription but als...