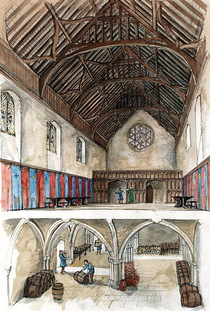 A nearby information board gives:

These ruins are all that remain of the palace of the powerful Bishops of Winchester, one of the largest and most important buildings in medieval London. Founded in the 12th century by Bishop Henry de Blois, brother of King Stephen, it was built to house the bishops in comfort when staying in London on royal or administrative business.
The visible remains were part of the Great Hall, which formerly stood alongside the south bank of the Thames. To the right {west}, the gable wall of the hall has doors which led to the buttery, pantry and kitchen, and it has a magnificent rose window.

Below the hall was a vaulted cellar, where goods such as wine could be stored, with a passage to the river wharf. The hall would have been lavishly decorated, and was often used to entertain royal guests, such as James I of Scotland and Joan Beaufort, who held their wedding feast here in 1424.

The rest of the palace was arranged around two courtyards, and housed many buildings, including a prison, brewhouse and butchery. As the Bishop’s private retreat from the stresses of medieval governance, the palace also had a tennis court, bowling alley and pleasure gardens. The palace remained in use until the 17th century, when it was divided into tenements and warehouses. The ruins were rediscovered in the 19th century following a fire, and were finally revealed in the 1980s during redevelopment of the area.

Our dates for this building are very approximate.

A London Inheritance has a great post about this.

This section lists the memorials where the subject on this page is commemorated:
Winchester Palace

The Rose Window in the west gable of the Great Hall of the London Palace of t...

We have taken our image from one of the boards that the Bedford Estates somet...

At 1 Rosslyn Gardens, Hampstead.   We don't know what went on in "Rosslyn Hei...