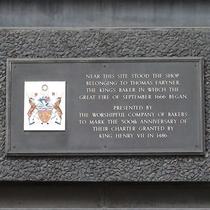 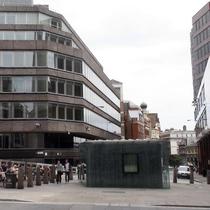 Near this site stood the shop belonging to Thomas Faryner, the King's baker, in which the Great Fire of September 1666 began.
Presented by the Worshipful Company of Bakers to mark the 500th anniversary of their charter granted by King Henry VII in 1486.

This section lists the subjects commemorated on the memorial on this page:
Faryner's shop

This section lists the subjects who helped to create/erect the memorial on this page:
Faryner's shop

This section lists the other memorials at the same location as the memorial on this page:
Faryner's shop

Sir Hiram Maxim and his gun

{By an image of a Lancaster Bomber:}Tests conducted by the Road Research Labo...

Ace CafeBuilt 1938 as part of a service area for the new North Circular Road....