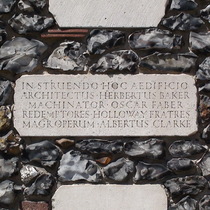 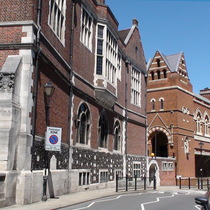 Heritage Calling has a photo of the "... gated and vaulted loggia {which} houses the sacred Memorial Shrine with a lamp that must remain lit at all times in memory of the 642 students who died in the First World War. Within the Shrine is a austere sarcophagus decorated with a carved sword and wreaths. Wall panels are inscribed with the names of the fallen ...". This loggia is to the left of our photo at the lower level.

"Management" is our guess at a translation for "MAGRE OPERUM" which is possibly an abbreviation and so the on-line translators can't cope.

This section lists the subjects commemorated on the memorial on this page:
Harrow School - War Memorial Building

A major construction firm with its own Wikipedia page. Henry Thomas Holloway ...

Worked on the 1921-6 construction of the Harrow School War Memorial Building,...

Structural engineer. Born London. Influential in the development of the use o...

This section lists the other memorials at the same location as the memorial on this page:
Harrow School - War Memorial Building