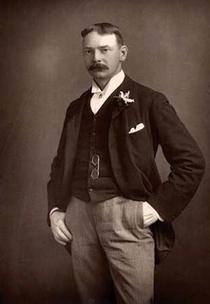 Novelist and playwright. Born Jerome Clapp Jerome at Bradford Street, Walsall, Staffordshire. He supposedly changed his middle name to Klapka in homage to General George Klapka, a hero of the Hungarian War of Independence. After trying various occupations, including acting and teaching, he was inspired to write 'Three Men in a Boat' following his honeymoon on the River Thames. It became a worldwide success. which was never repeated in his subsequent plays and novels. Died in Northampton General Hospital.

This section lists the memorials where the subject on this page is commemorated:
Jerome K. Jerome

Poet and biographer. Born at Scarborough into the aristocracy. 6-foot tall,...