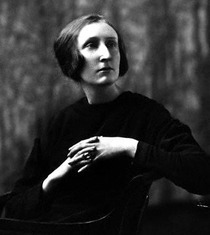 Poet and biographer. Born at Scarborough into the aristocracy. 6-foot tall, with elongated features she added to the effect with her exuberant flowing and ornate clothing. Her poetry was avant garde and concerned with musicality. Her performance of Façade in 1923 has been described as early white rap or like a "happening" from the 60s, and attracted the same response - bemusement. Noel Coward's review caused her to refuse to speak to him for 40 years. But she gradually gained respect and, when she and her brother Osbert toured America they were a great success, especially with the stars in Hollywood. She was early to promote the work of Dylan Thomas. In WW2 she contributed to the war effort by knitting clothes for friends in the forces, including Alec Guinness.
Died, unmarried at St Thomas's Hospital. Her nephew, Francis, was her literary executor.

There is a wonderful 1943 portrait of her by Wyndham Lewis.

This section lists the memorials where the subject on this page is commemorated:
Dame Edith Sitwell

Thriller writer. Born at the site of the plaque as René Lodge Brabazon Raymon...

Writer of thriller novels such as The Woman in White, The Moonstone. Born 11 ...