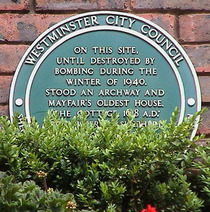 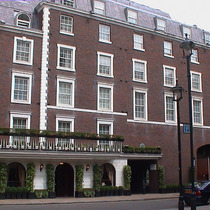 Westminster City Council
On this site, until destroyed by bombing during the winter of 1940, stood an archway and Mayfair's oldest house, 'The Cottage, 1618 A.D.' from where a shepherd tended his flock whilst Tyburn idled nearby.

Unveiled as part of Westminster's 50th anniversary commemorations marking the end of World War II.
The plant-screened section of the text was provided by our colleague, Alan Patient.

This section lists the subjects commemorated on the memorial on this page:
Mayfair's oldest house

From Westminster: Mayfair suffered a direct hit during the Blitz of winter 19...

This section lists the subjects who helped to create/erect the memorial on this page:
Mayfair's oldest house

Site of the 13th century Hospital of St Anthony and of the French Protestant ...

Our Lady of Willesden - WW2

In memory of men of the Parish of Our Lady of Willesden who lost their lives ...